The South Australian Rainbow Advocacy Alliance (SARAA) notes with sadness the blatantly queerphobic graffiti spray painted on Adelaide’s Rainbow Walk at some point last night, in which the rainbow pavement was spray-painted with the word ‘REPENT’. But SARAA’s Policy and Project Officer, Kelly Vincent, says the organisation refuses to give the vandal the reaction they are looking for, and instead focus on the bigger issues. 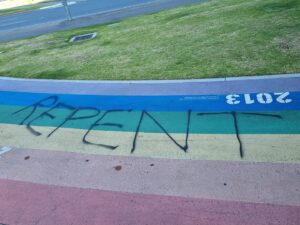 “You’re not edgy, you’re not freethinking, you’re just uninformed and boring,” is Mx’s Vincent’s message to the vandal.

“Queer people are tired of those who use fear to get their message across because they simply can’t be bothered learning the facts,” Mx Vincent said.

“Science, medicine, and psychology have agreed for decades now that LGBTIQA+ people have nothing to ‘repent’”.

“Our laws must condemn prejudice, not condone it,” they said. “That is why South Australia must go further to protect victims of hate crimes.”

SARAA worked on a Bill that has been introduced to Parliament by Greens MLC Tammy Franks. This includes hate crimes towards people based on factors such as their race, religion, age, sexual/romantic orientation, disability, gender or gender expression, or intersex variation.

SARAA is also working with survivors of conversion practices with the goal to change laws in South Australia. Conversion practices such as “praying the gay away” have been repeatedly shown to be extremely damaging to the long-term health and happiness of LGBTIQA+ people.

“We are proud to be supporting survivors of sexual orientation and gender identity change efforts (SOGICE) here in South Australia to see legislation passed that safeguards LGBTIQA+ South Australians from these harmful practices.”

“But we need more than just words,” Mx Vincent said.  “We call on Premier Steven Marshall, Leader of the Opposition Peter Malinauskas, and all other parliamentarians to work with SARAA and survivors to pass this legislation urgently. Health, happiness, and even lives are at stake.”

SARAA thanks the City of Adelaide for cleaning up the graffiti quickly.

Big thanks to QNews for their coverage of this story.