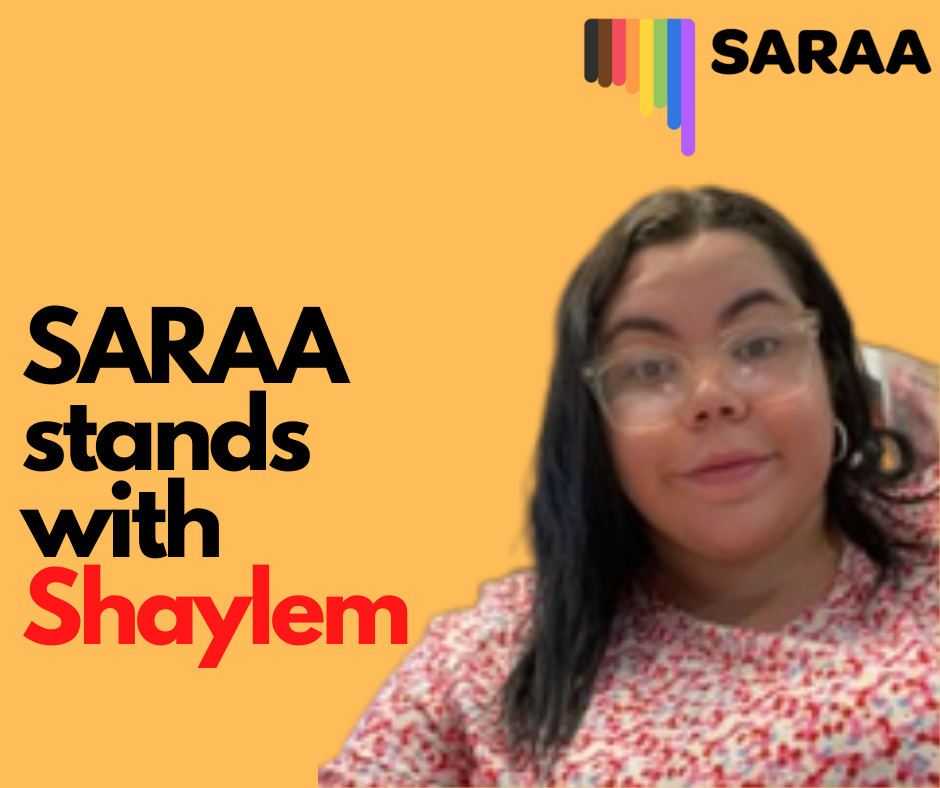 Clarification: this statement intends to call out the actions of Awards Australia, the organisation behind the Aboriginal Achievement Award and Pride Award. We recognise that whilst these awards are sponsored by the Department of Human Services, they’re one of many actions the Department is taking to tangibly and meaningfully support Aboriginal and LGBTIQA+ South Australians. Through conversations with Department of Human Services we’ve encouraged them to proactively share this work with the broader community.

The SA Rainbow Advocacy Alliance are deeply disappointed by recent actions of Awards Australia, the company behind the 7NEWS Young Achiever Awards SA.

We congratulate Shaylem Wilson on calling this behaviour out and release this statement in support of her advocacy.

Last week 7NEWS Young Achiever Awards published a post on their Facebook page announcing the finalists for the Aboriginal Achievement Award. Yet instead of posting an image of finalist Shaylem Wilson, they published an image of another Aboriginal person instead.

This is yet another example of racial microaggressions faced by First Nations folks on the daily and we stand with them in the fight for racial justice.

While this may seem like a small error, for people who are already marginalised by society and must battle just to have their voices and needs acknowledged, these actions only add to the significant barriers and discrimination First Nations people already face.

It is a heavy and unrelenting load to bear that organisations like Awards Australia should be actively trying to lessen, not add to with their carelessness.

This is especially so for an award that intends to “recognise contributions [of young Aboriginal people] to the Aboriginal and/ or broader community, barriers overcome, leadership skills and cultural achievements”.

SARAA acknowledges the toll that actions such as these have on both individual and community wellbeing. We recognise the exhaustion felt by those who constantly come up against barriers to full respect and participation in society and we commit to constant reflection on our own practices so that we can stand in strong and constructive allyship with First Nations people.

SARAA has previously assisted the 7NEWS Young Achiever Awards team in developing the inaugural Pride Award for young LGBTIQA+ people. However, given the actions of Awards Australia last week, we withdraw our support for Awards Australia until genuine progress towards racial justice within the organisation can be demonstrated.

A number of incredible young people have been finalists for this Award – Tiahni Adamson, Shaquille Likouresis and Shaylem Wilson for the Aboriginal Achievement Award and Jacinta Clark, Thomas Fonua and John / Alex Kelly for the Pride Award. By no means should the actions of Awards Australia detract from the celebration of their achievements. If anything, we hope this statement supports their work to strive for a more just and equal world.

We acknowledge that the 7NEWS Young Achiever Awards team has since deleted the inaccurate post and issued an apology to both Shaylem Wilson and the person whose photo was incorrectly used. We call on Awards Australia to back up these words with meaningful action to support young Aboriginal people.

The 7NEWS Young Achiever Awards are incredibly expensive events to produce, with Awards Australia’s 2021 Partnership Proposal quoting a cost of $13,950-$17,450 for organisations and government departments like the Department for Human Services wanting to sponsor an award category.

Recognising the achievements of young people is important. But it needs to be matched with cultural and systemic change.

SARAA therefore calls on the Department for Human Services to withdraw financial support for Awards Australia in all future years and instead contribute funds to meaningful support for and recognition of Aboriginal and LGBTIQA+ communities, in consultation with the communities themselves.

Varo L.E., SARAA Chairperson and the entire SARAA Board and staff