On 15 November 2017, SARAA held the first Ian Purcell Oration as its contribution to the FEAST Festival at the State Library

An Oration is to be held each year by SARAA to honour the contribution made by Ian to our South Australian LGBTIQ Community and to enliven current debates and LGBTIQ advocacy. The Orations will also have a special function of helping us to remember our communities history.

The 2017 Ian Purcell Oration was a free event.

Kenton Penley Miller gave a very entertaining oration, speaking to Ian’s political and cultural contribution, touching on the history of South Australian advocacy in the 1970’s and 1980’s.

Kenton’s speech recognised the contributions of Ian’s friends and collaborators, many of whom were in the room.

The 2017 Oration was a great success and SARAA looks forward to curating many more.

We thank Stephen Leahy for his support of the event, Kenton for a fantastic speech, Jenny Scott for making a photographic record of the Oration, all those who attended or helped to make the evening so memorable.

Though the Oration was planned long before the Marriage Survey was called by the Commonwealth Government, the news received that morning of the resounding Yes win gave the event a special joyfulness, with many conversations around the room of how deeply we had felt the last months and our anxiety for the outcome.

SARAA also thanks the sponsors of the 2017 Oration, particularly SHine, Camatta Lempens and Peter Hall, Accountants. 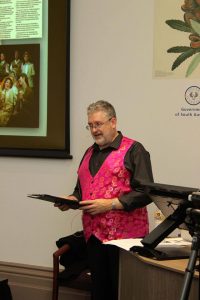