In 2016 we wrote to then Premier The Hon Jay Weatherill with our friends at Human Rights Law Centre to commend the South Australian Government on being the first state to introduce laws aimed at redressing historical wrongs caused by remaining convictions for consensual same-sex activity.

However, we called for the scheme to be broadened to include the full range of offences used to persecute LGBTIQ people, to achieve ‘expungement’ rather than spending a conviction, and to be accessible, confidential and more sensitive to the needs of LGBTIQ people who have suffered trauma. 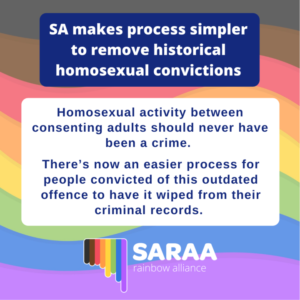 In 2020, we saw SA Parliament make further changes to make it easier for people convicted of this outdated offence to apply to have it wiped from their criminal records, known as spending a conviction.

South Australian laws have allowed people to remove homosexual activity convictions from their criminal record since 2013. The difference is the new laws mean that a Magistrate can no longer take the person’s other criminal history into consideration – the main consideration is now whether or not the conduct still constitutes an offence.

You can find a fact sheet and an easy read guide explaining the process for removing a historical offence from your criminal record on the SA Government website at the bottom of this webpage.

If you need help to have a conviction removed, contact the Legal Services Commission of South Australia on 1300 366 424.