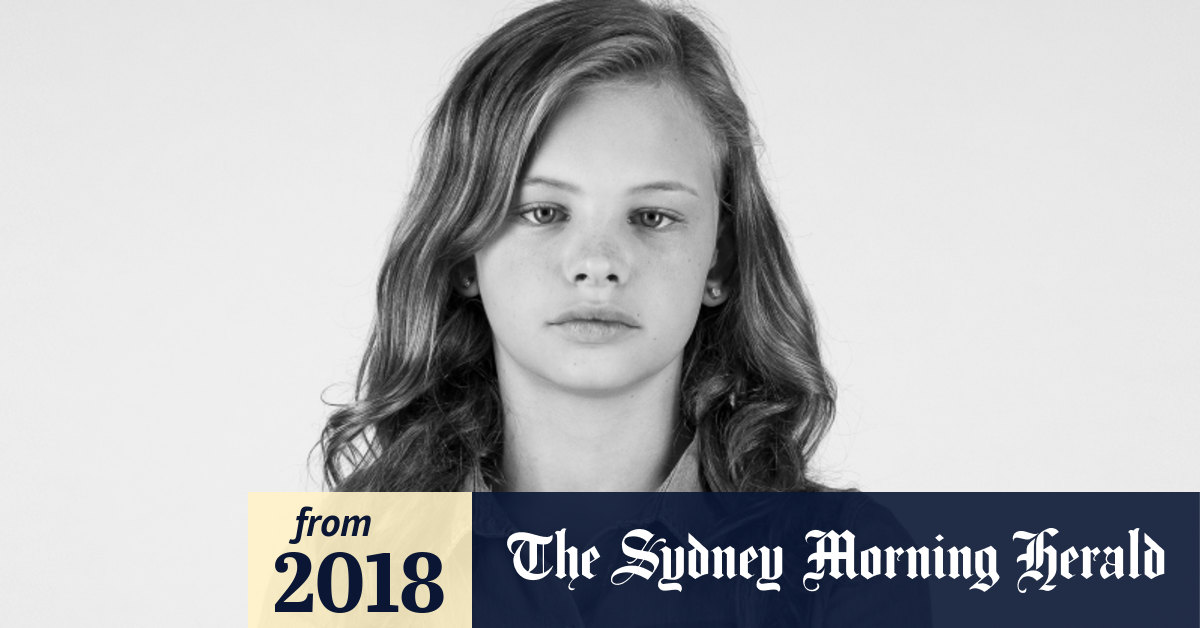 In 2021 SARAA surveyed 623 LGBTIQA+ South Australians and their allies in partnership with our friends at Equality Australia to develop our community’s Vision for SA Pride 2030.

Ending harmful and damaging conversion practices that try to change or suppress our sexuality or gender identity was our communities most important issue, with 85% of participants rating this as extremely or very important.

With legislative bans on conversion practices in place in Victoria, Queensland and ACT, South Australian leaders must act to protect our LGBTQA+ communities from harm.

What are conversion practices?

When most hear the words ‘conversion practices’ in relation to sexual/romantic orientation and gender identity, many picture false assumptions of LGBTQA+ people laying on chaise longues being subjected to psychoanalytic therapy, being sent off to summer camps where they “pray the gay away”, or receiving electroconvulsive shock treatment.

They might also assume that the idea of trying to alter someone’s sexuality or gender is something of the past.

In reality, we know that conversation practices involve a broad range of subtle and insidious techniques that continue today, legally, right here in South Australia. 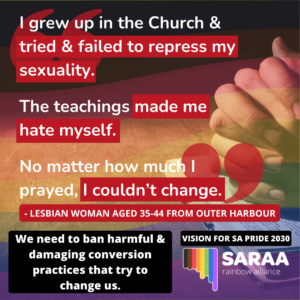 Conversion practices are underpinned by ideologies that view LGBTQA+ people as broken and assert that LGBTQA+ people can be “healed” to live ‘healthy heterosexual’ lives or with a gender identity consistent with their sex assigned at birth. They encourage us to live “sexually pure” lives through celibacy or abstinence and ultimately aim for LGBTQA+ people to change their orientation, gender identity or de-transition.

These practices are extremely damaging and not at all therapeutic, therefore our community uses the term ‘conversion practices’ instead of ‘conversion therapy’.

Clinical or therapeutic formal methods of conversion practices such as conversion organisations, behavioural and psychoanalytic therapies and clinical interventions have now largely ceased after being denounced by numerous professional health and human rights bodies including the Australian Psychological Society and Australian Medical Association.

Yet conversion practices and ideologies are still perpetuated in informal community settings. These practices are often complex and nuanced practices that can range from subtle to overt and occur in a range of forms that can include:

While conversion practices can take place in religious environments, their underpinning ideology is not unique to faith-based settings. Therefore it is important that legislative action is taken to protect LGBTQA+ people from this outdated and damaging ideology, wherever it may occur.

For more information about conversion practises and ideologies we strongly recommend reading the work of survivor led advocacy groups such as The Brave Network, and affirming the SOGICE Survivor Statement.

How are conversion practices harmful to LGBTIQA+ people?

Psychological research has produced overwhelming clinical evidence that practices aimed at the reorientation of LGBT people not only do not work, but are extremely damaging to the long-term health and happiness of LGBTIQA+ people. 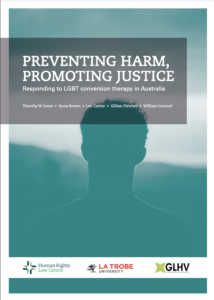 A 2018 joint report from the Australian Research Centre in Sex, Health and Society and the Human Rights Law Centre shares the voices and lived experiences of 15 LGBT people with experiences of conversion therapy. It found that all participants shared the following experiences:

Damaging conversion practices have no place in modern Australia, yet continue today. Indeed, the Preventing Harm, Promoting Justice report estimates up to 10% of LGBTQA+ Australians are still vulnerable to harmful conversion therapy practices.

SARAA is frequently contacted by members of our community who have experienced conversion practices in South Australia, predominantly in conservative religious settings.

Often these community members are young and their experiences of conversion practices are recent, occurring within the last 5-10 years. They’re often unable to speak publicly about their experiences for fear of being outed or damaging relationships with family, friends and other members of their faith community. 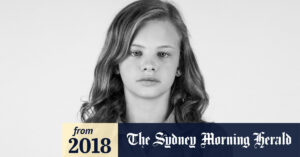 Our experience is reflected in a 2018 investigation undertaken by Fairfax Media which found:

Gay conversion has been discredited as ineffective, damaging, even dangerous. But across Australia, organisations who believe that LGBTI people can or should change are hard at work.

Conversion practices are hidden in evangelical churches and ministries, taking the form of exorcisms, prayer groups or counselling disguised as pastoral care.

They’re also present in some religious schools or practised in the private offices of health professionals.

They’re pushed out through a thriving network of courses and mentors in the borderless world of cyberspace, cloaked in the terminology of “self improvement” or “spiritual healing”. 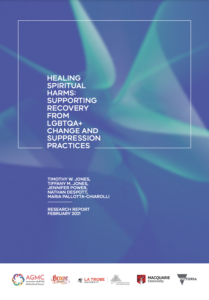 More recently, researchers from the Australian Research Centre in Sex, Health and Society interviewed 35 survivors of LGBTQA+ conversion practices and 18 mental health practitioners to improve understandings of the experiences of recovery for Australians who have been harmed by LGBTQA+ change and suppression practices. This report concludes:

As social and political recognition of the continued harms of LGBTQA+ change and suppression practices continues to grow, concern is shifting from demonstrating the ethical problems with these practices to enhancing the supports for survivors of these practices to heal and recover. …

More clearly than previous studies, this report articulates the severity and complexity of harm experienced by survivors in the terms of complex trauma and PTSD. For survivors who seek formal mental health or counselling support for recovery, this process is often longterm

What are other Australian States and Territories doing about conversion practices?

Conversion practices are banned in Victoria.

The Victorian Change or Suppression (Conversion) Practices Prohibition Act 2021 began on 17 February 2022. It bans practices that seek to change or suppress a person’s sexual orientation or gender identity.

The ban applies in both health and faith based settings.

Find out more about the Act on the Victorian Equal Opportunity & Human Rights Commission at www.humanrights.vic.gov.au/change-or-suppression-practices.

Conversion practices are banned in the Australian Capital Territory (ACT).

The Sexuality and Gender Identity Conversion Practices Act 2020 came into effect on 4 March 2021.

If conversion practices are undertaken against a person with full mental capacity, it will be up to the ACT Human Rights Commission and/or the ACT Civil and Administrative Tribunal (ACAT) – bodies independent of Government – to investigate, conciliate or mediate and determine reparation, depending on an individual’s circumstances.

If conversion practices are conducted against a child, or a person with impaired decision-making ability, a potential prison sentence of up to 12 months may apply. This decision would be reached by the Courts.

Find out more about ACT’s ban on conversion practices on the ACT Government’s website.

On 20 August 2020, the Public Health Act 2005 was amended to prohibit conversion practices in the context of health services delivered in Queensland.

Read more about the ban here.

The Tasmanian Premier has said he will lead reforms in his state to ban dangerous LGBTIQA+ conversion practices.

In December 2022 the McGowan Labor Government committed to criminalising practices that seek to change or suppress an individual’s sexual orientation or gender identity.

The South Australian Government has committed to a legislative ban on conversion practices.

Conversion practices are currently legal in the Northern Territory.

A coalition of organisations dedicated to the health and human rights of sexuality and gender diverse communities is calling on political parties to introduce legislation to end conversion practices.

Read their asks for the NSW Election 2023 here. 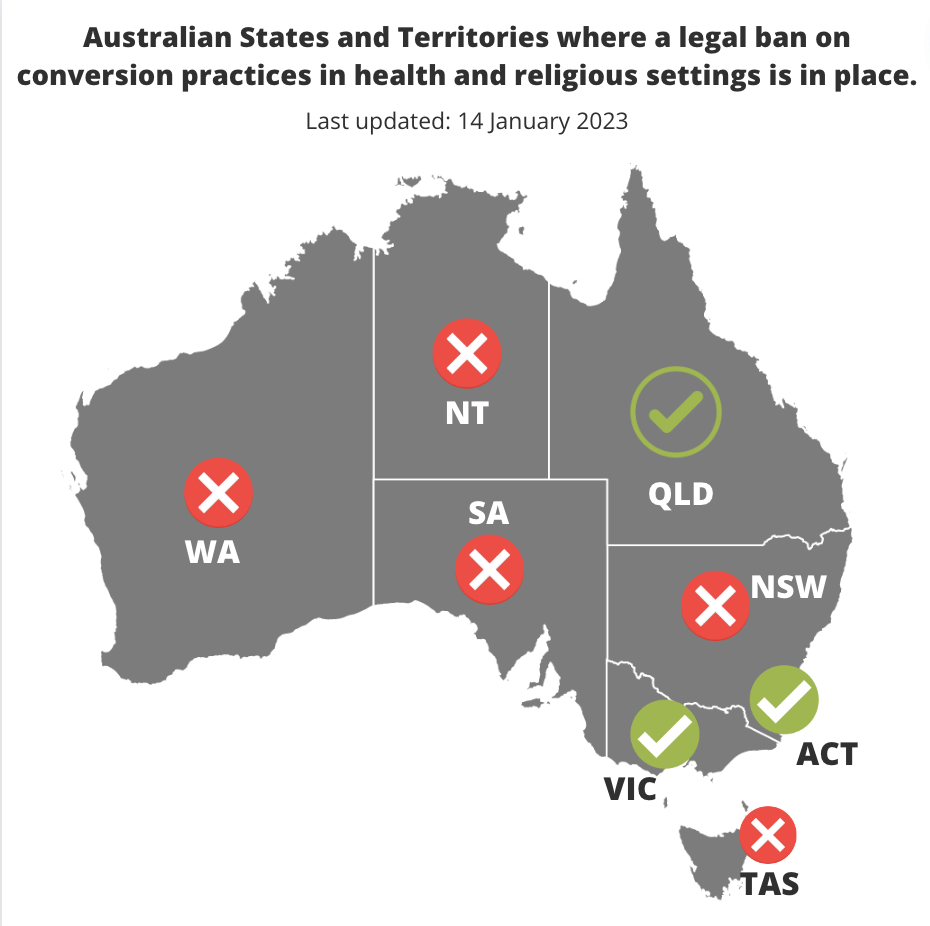 What does SA Pride on this issue look like in 2030?

We need laws to ensure LGBTIQA+ people in South Australia are protected against conversion practices – attempts to change or suppress a person’s sexuality or gender identity.

This law reform should be accompanied by a suite of comprehensive policy measures that respond to the issue of conversion practices in South Australia including:

SARAA affirms the SOGICE Survivor Statement and calls on South Australian leaders to implement its recommendations.

As our friends at Intersex Human Rights Australia state in their Statement on the Religious Discrimination Bills package ‘Historically, people with intersex variations have not been subjected to religiously motivated discrimination in the same way as gay, lesbian, bisexual and transgender people’.