In 2021, SARAA was joined by members and allies of our LGBTIQA+ communities to recognise IDAHOBIT's theme 'Together: Resisting, Supporting, Healing!'.

Held at Uniting Communities, the event was opened by The Hon. Michelle Lensink, Minister for Human Services.

We heard a powerful and stirring speech from Dominic Guerrera, a Ngarrindjeri, Kaurna and Italian person who's primary work has been as an Aboriginal Health Worker and Educator for 17 years, with a focus on sexual health.

Dominic spoke about the need for the LGBTIAQ+ community to tackle its own prejudices and blind spots by committing to decolonisation and greater inclusion of First Nations peoples, and others who can be marginalised as a result of ableism and fatphobia.

This event was made possible by generous funding from the Department of Human Services, SA Government.

View photos from the event, and read Dominic's powerful IDAHOBIT 2021 address below. 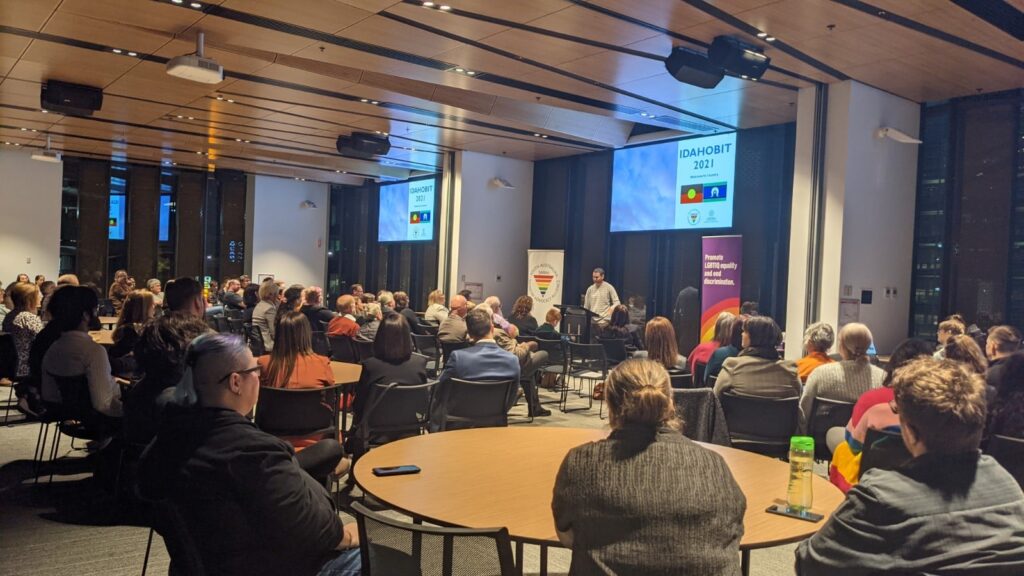 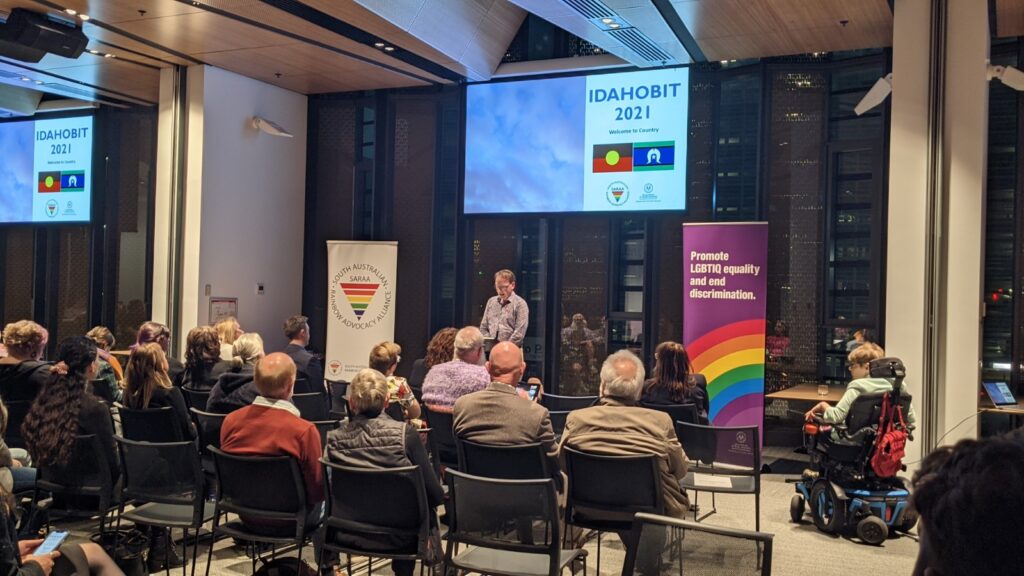 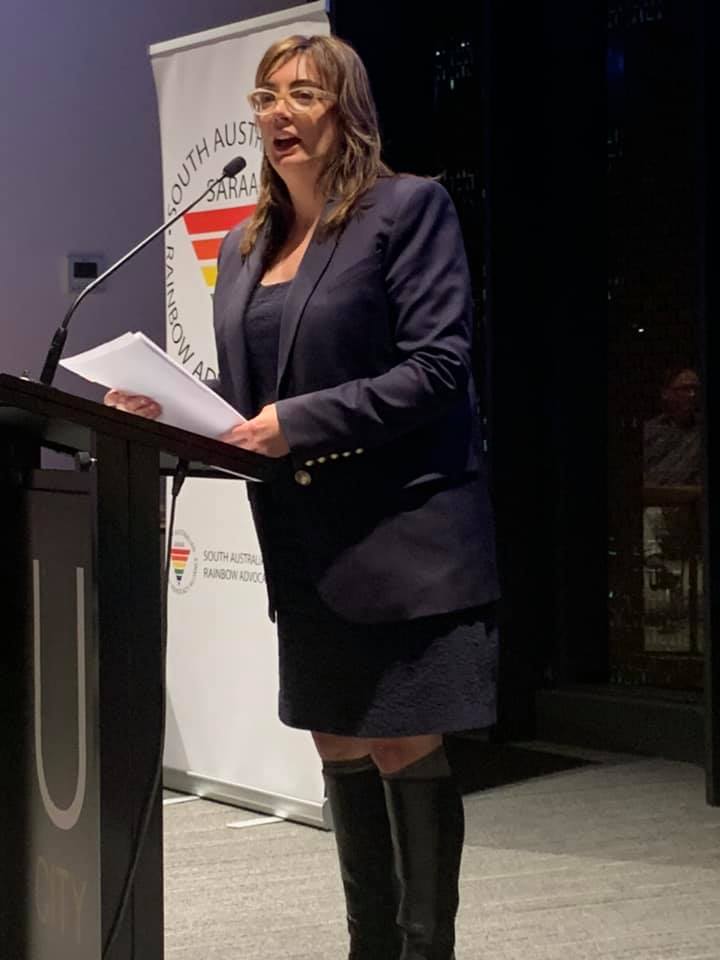 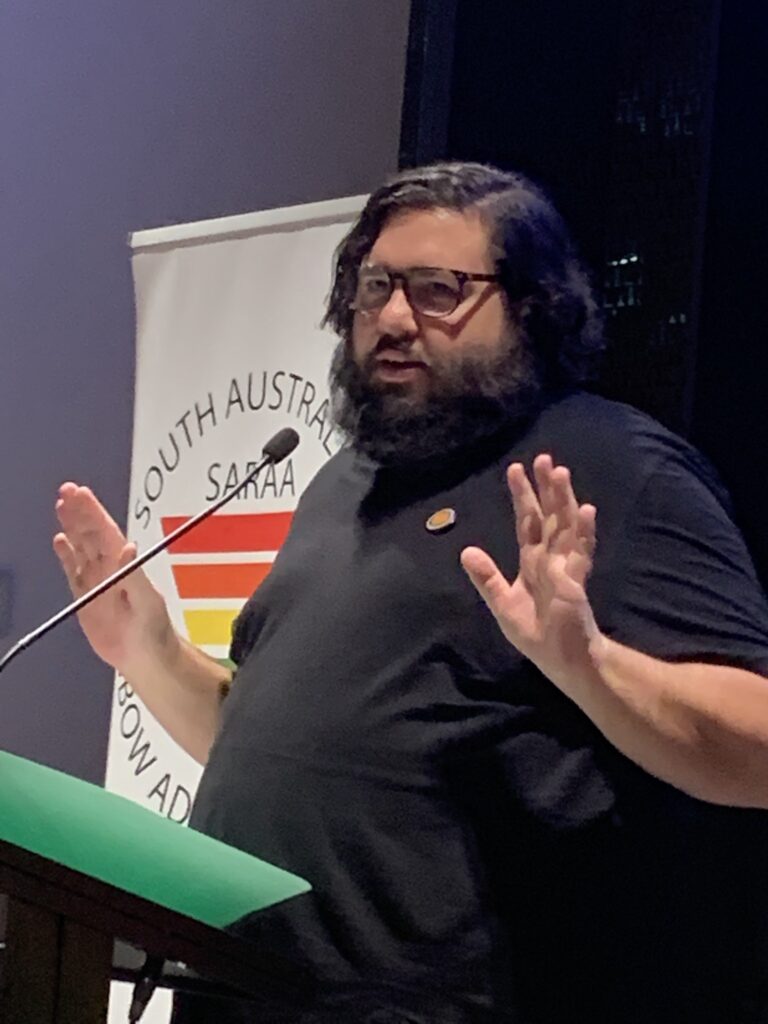 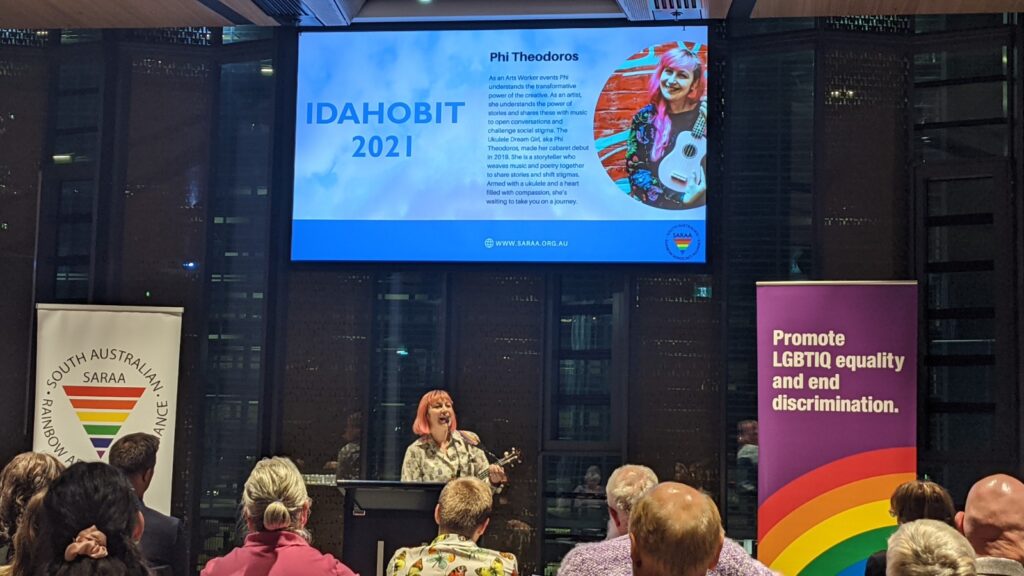 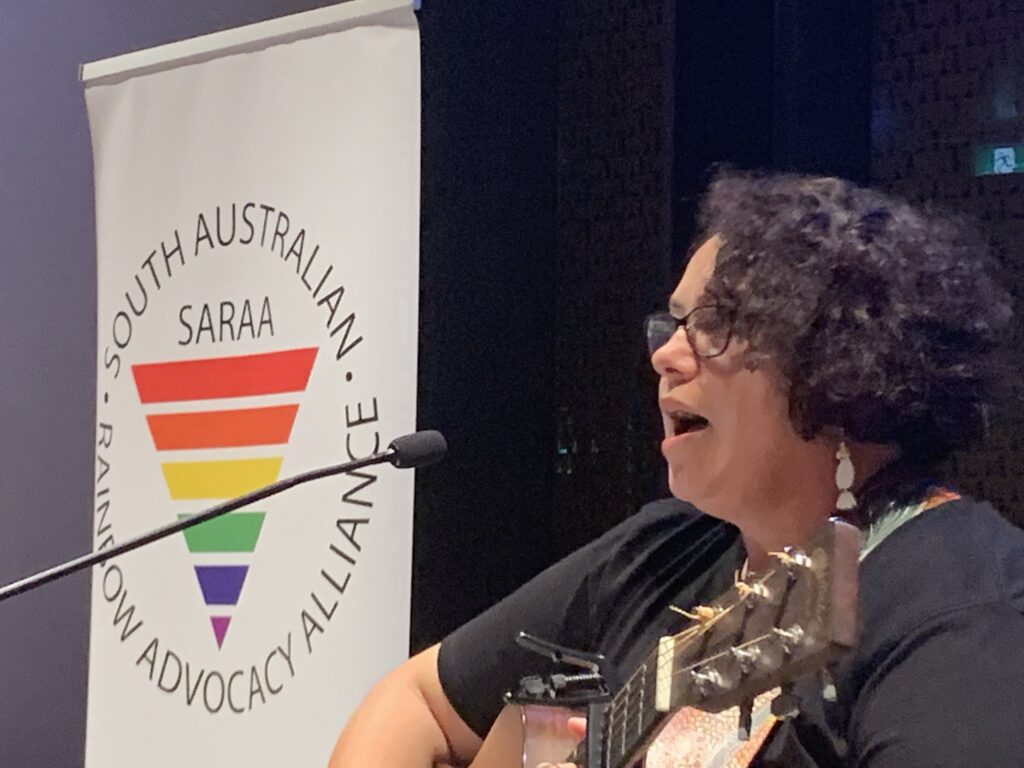 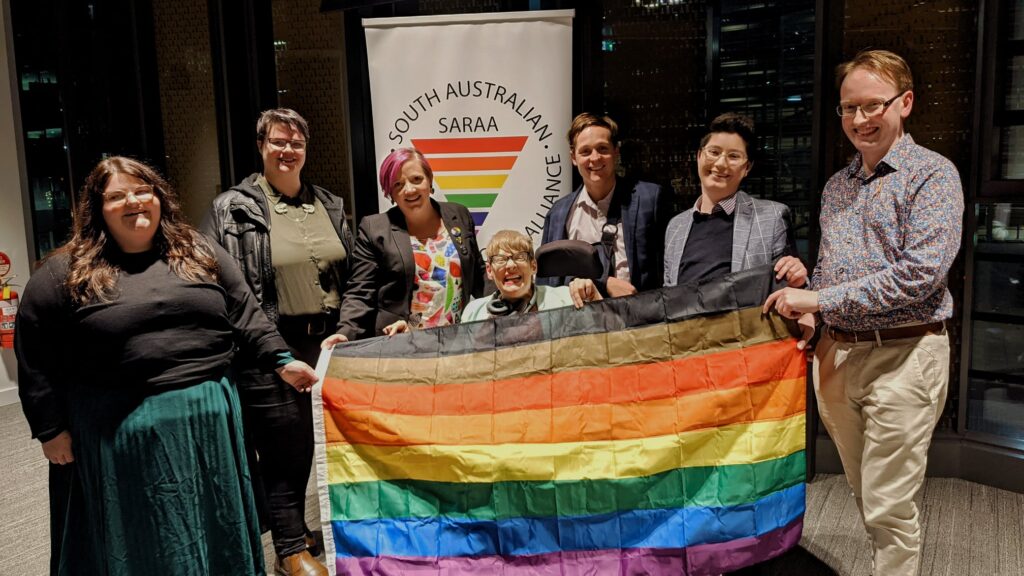 As a person who belongs to this land, I have a cultural obligation to learn and tell stories from it.

But I also have the burden to tell the stories of invasion, colonisation and oppression. Because if we don’t, who will?

Through speaking up, we are literally keeping ourselves in existence and reminding you that our sovereignty is true.

We have been forced in a position to remind you that you are on Kaurna Yerta.

This is not your land, it's not even mine, because you can't own land — but rather, we, as Kaurna people belong to this land, the land owns us.

Honestly, think how many times you have been welcomed to country or done an acknowledge of land and tell me what you have done since acknowledging the fact that we are the people of this land, that invasion and genocide continue to take place.

So you’ve been welcomed, now what?

I want to thank SARAA for asking me here today, but to stand in truth I need to actually thank the Aboriginal Queers who came before me.

Those who put their bodies, words and culture into white queer spaces.

Spaces that didn’t want them, rejected them, violently attacked them. Because despite being queer, whites are still gonna be white, colonisers gonna be colonising. Plus we have better dance moves.

The work we do today is not born out of our imaginations, but rather out of the hard work of those who came before us, we are nothing but a continuation of the past, leading into the future.

All queer people of colour who reside on Kaurna country need to acknowledge that the work they do is built on the work of Aboriginal queers. You need to learn the local history, celebrate it and then continue it. Stop trying to be the first at something, because there is no ‘being the first’ of anything, on a land that has a history of 65,000 years - because the wealth of human existence, just here on yerta, its immeasurable.

Ok time to get real.

The Adelaide Queer scene is racist.

The Adelaide Queer scene is not accessible for Disabled Queers.

The Adelaide Queer scene is in some ways very anti-community.

It can be an insulated bubble, an echo chamber of complacency and back patting, where a lot of people what to be seen doing the work, without actually doing the work.

It relies on white structures and hierarchies, especially that of capitalism.

We've seen it, in the clubs and events, on the apps and on social media. Some of us, have had it in our faces or marked on our bodies. We’ve seen it with corporate wankers sneaking in, the greed of money and power. The need to put ego above community.

And because of this we have a lot of work to do.

Because it's ironic that on a day that marks the removal of homosexuality from WHO’s international classification of diseases and we still struggle to remove uniformed police from pride.

And how am I suppose to feel pride in a parade the sends me down a side street, out of view, out of mind. While our disability siblings are waving to us from shuttle buses because the route isn’t wheelchair friendly.

I mean, how did we go Martha P Johnson to corporate white cis-men, brick throwing to rainbow cupcakes, queer liberation to suburban gays, protest to parade. We struggle with a lot of things, but being complacent isn’t one of them.

I am longer going to be detained in a mental health facility because of my sexuality, but yet we as Aboriginal people are being detained at the highest rates in the world.

Youth prisons in the NT are often 100% Aboriginal detainees, where children are held in cells and stripped naked or tied to chairs, faces covered with spit hoods, alone and in the dark while calling out to their mothers.

A system that traps them and won't let go. Detained, incarcerated, where some spend most of their lives in jail, while others don’t make it out, killed by prison guards or police officer, packed up and slid into the back of a paddy-hearse

And yes we are at 8 deaths in custody as of today.

And yes some deaths in custody are Aboriginal people are also queer.

Because if we as Aboriginal people can live with over incarceration, disease, living 10-15 years less than you, death, oppression, malnourishment, poverty, invasion, having our children removed and racism - and still fight for our rights and that of others - then so can the Adelaide queer community, particularly the white queers.

I came here tonight to start some fires, let's burn down the institutions that oppress us and replace them with communities with better infrastructure. Start asking for change and when that doesn’t work, demand it and if you don’t get anywhere with that, start it yourself.

We need to think about sometimes operating without money and capitalism.

We need to stop performing and start protesting.

White queers need to be reading Decolonising Solidarity by Claire Land and running workshops/ discussion groups to work through this.

Each and everyone one of you should own a copy of Colouring the Rainbow published by Wakefield Press.

You all need to be rocking up to Aboriginal events that are organised by Aboriginal community - you can start with Moolagoo Mobs’ exhibition at the migration museum or signing the petition to band the spit hoods.

We need to be engaging, networking and working with communities outside of the queer community. Such as unions, cultural groups and other activists

You need to think about capacity building and making sure young queers have a space to learn skills, particularly around community organising.

We need to learn our local histories.

We need to be looking around us and acknowledging who is missing and then asking them to join.

How about we have quotas that limit how many cis white men we have sitting on committees, boards and organising groups.

We need to stop calling the cops and start calling each other.

We need to stop talking about accountability and just be fucking real.

Someone once asked me what Queerness meant to me, I said it represents the infinite possibilities of human genders, sex and sexuality and also the absence of them - which to me this is a really beautiful thing. So let's make our community radiate that beauty.